Menu
Home » About us

Chatterbox was established in Norwich in 1978 as one of the first Talking Newspapers (TNs) to produce audio recordings for visually impaired and blind people in the UK. Today, Chatterbox is a substantial and well-respected charity still serving listeners mostly in the Norwich area but increasingly across Norfolk and further afield. Our Patron is Becky Betts, formerly with BBC Radio Norfolk, now lecturer in media studies and co-director of two media companies. Excellence in readers has always been a Chatterbox strength and, currently, our voices include Susie Fowler-Watt with BBC Look East; John Francis, former ITV broadcaster; and Jonathan Wills, ITV presenter. Other voices often include Maddermarket Theatre actors.

The charity operates in accordance with Charity Commission guidelines and a committee and trustees are elected annually at an AGM to manage its affairs. The charity owns premises close to the city centre, which includes well-equipped offices, production area, recording studio, and a self-contained flat that provides important on-going funding. All of the approx. 90-strong staff are volunteers.

The main audio publication since 1979 has been weekly news taken from the Norwich Evening News and Eastern Daily Press. A quarterly magazine of local live interviews was added in 1998. In 2013, a further magazine was added taking articles from Archant’s well-known EDP Norfolk monthly magazine. 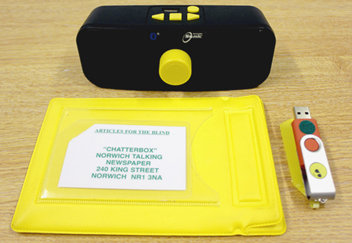 At a peak, Chatterbox produced over 900 tapes per week, although by 2010 listener numbers had fallen to around 280 (in line with a fall-off experienced by all UK TNs). Chatterbox continued at this level until the introduction of Chatterbox EDP Norfolk monthly magazine, which has lifted the listener numbers to around 400. In addition, another approx. 700 listeners enjoy Chatterbox recordings via other Norfolk TNs that re-record our EDP Norfolk magazine for their listeners. In this way, over 1000 listeners, either directly or indirectly, now receive Chatterbox recordings.

An independent panel of blind and partially-sighted listeners monitors all our recordings and regularly audits them for quality of sound and content. 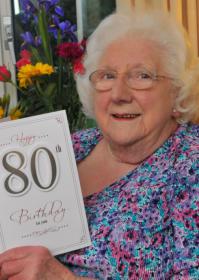 Chatterbox continues as a friendly association of like-minded people with a strong caring spirit towards listeners and colleagues. For example, photographs of all founder members still hang on the wall of the main production room. Most have now passed away but fond memories remain.

Meg Muggridge MBE (1932 - 2013) was a principal founder who played a significant leadership role at Chatterbox over many years, finally retiring from active service in 2006. She served as chairman several times and also played a major part in promoting Chatterbox on the Norwich scene. Meg was also Chatterbox’s Life President. You can read Meg’s history of Chatterbox on Links.

We recently had the pleasure of Mustard TV covering a feature on Chatterbox's most recent collaboration with Let's Talk magazine. Let’s Talk is the lifestyle magazine for East Anglia with features about local people, local events, and a nostalgic look back at the way we lived, worked and played. The Let's Talk magazine is usually recorded once a month.